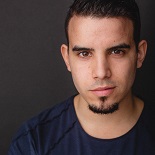 David Guzman was recently the Dance Captain, swing, and understudy of John Laurens/Philip Hamilton in Hamilton: An American Musical on Broadway. You can catch him in Steven Spielberg’s West Side Story as one of the Sharks. He grew up dancing at The Gold School in MA under the direction of Rennie Gold. David was a principle Lost Boy in NBC's Peter Pan Live. He also played Graffiti Pete in In The Heights at North Carolina Theater. He left high school at age 17 to join Newsies the Musical on Broadway. He has also taken part in the Newsies National Tour and most recently was featured in the Disney Plus film version. Endless love to my fiancé Karla, my fam: Jacob, Mom, Dad, Liana, and Elisa, and my agents CTG. @D_Guzz on Instagram.