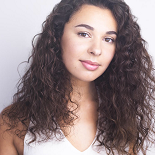 Mia Pinero is beyond thrilled to bring joy and laughter to Houston! Broadway: West Side Story. Regional: My Fair Lady, Yoga Play at PlayMakers Repertory Company, Songs for a New World at Paper Mill Playhouse, In the Heights at Geva Theatre Center, West Side Story at the Guthrie Theater. Her concert credits include venues such as Lincoln Center, the Times Center, and Feinstein’s/ 54 Below where she made her solo debut performance in Growing Up: An Album Release Celebration in Concert!. On camera, Mia played Angelica in Law and Order: SVU, was featured on a CitiBank commercial where she got to eat BBQ chicken wings (a favorite), as well as being featured on The Today Show. This past spring, she released her solo debut album, Growing Up, which is available on all streaming platforms. Special thanks to BWA, JZ Casting, her family, and Dan (my real life Jerry). Instagram: @miapinero.