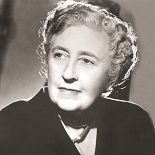 Agatha Christie, born in Torquay, England in 1890, is the best-selling novelist of all time. She wrote 66 crime novels, 6 non-crime novels, over 150 short stories and over 20 plays. The Mousetrap has been running continuously since 1952 at the St. Martin’s Theatre in London’s West End making it the longest running play in the world. Christie is also the most translated author with books published in over 100 languages and, with over 2 billion books published in total, she is outsold only by the Bible and Shakespeare. Her work includes Murder on the Orient Express, Death on the Nile, and the genre-defining And Then There Were None.

Christie taught herself to read by age five, published a poem at age 11, wrote her first short story at 18, and at age 26 wrote her first detective novel which would go on to be published in 1920, the same year she turned 30. The novel “A Mysterious Affair at Styles” featured a retired Belgian Gendarme turned private detective inspired by the many Belgian refugees living in the English countryside during World War I. She continued to write while serving as a nurse and pharmacist during both World Wars, which sparked a lifelong interest in poisons, the murder method of choice in many of her stories. In fact, a murderer’s use of poison was so well described in one of her novels that she received the unprecedented honor of a review in the Pharmaceutical Journal.

In peacetime, she traveled extensively, including to the exotic settings featured in her novels. Her debut voyage on the Orient Express took place in 1928, the first of many trips on the train, with her typewriter in tow. During one particular journey, the train was stuck for two days due to flooding, which washed away part of the track and inspired certain dramatic events in her famous novel published just a few years later. Christie was made a Dame of the British Empire in 1971 and her final public appearance occurred at the royal premiere of Sidney Lumet’s 1974 film adaptation of Murder on the Orient Express, which generally pleased her except for the fact that Poirot’s mustaches weren’t sufficiently luxurious.