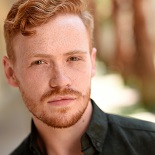 B Connor Flynn is delighted to return for Amerikin, his third production with the Alley Theatre. He was previously featured at The Alley in 2018 as Antonio in Twelfth Night and has worked as a Teaching Artist for the ECE program. Other notable productions include: Main Street Theatre: The Hard Problem (Spike), Christmas at Pemberley (Mr. Darcy) and The Landing Theatre Company: The Best Punk Band in Conway Missouri (Various Roles).  Connor also appeared at the Edinburgh International Fringe Festival as Duke Vincentio in a production of Measure 4 Measure.