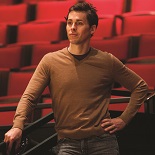 Brandon Weinbrenner is the Alley’s Associate Producer & Casting Director. At the Alley he has directed Dead Man’s Cell Phone, A Christmas Carol, Fully Committed, The Humans, Venus in Fur, the digital productions of A Christmas Carol and Man.Kind., and several workshops and readings as part of Alley All New. Brandon previously served as the Alley’s Resident Assistant Director, assistant directing over 25 productions. Around town he has directed The Children and The Royale at Rec Room Arts, Fool for Love at The Landing Theatre Co, Stage Kiss at 4th Wall Theatre Company, Buyer & Cellar and Native Gardens at Main Street Theater, and most recently Picnic at the University of Houston. Past theatrical credits include serving as the Bret C. Harte Directing Fellow at Berkeley Rep, producing the 2013 Out of the Loop Fringe Festival in his hometown of Dallas, Texas, and acting in productions at the Guthrie Theater, among others. Brandon is a graduate of the University of Minnesota/ Guthrie Theater BFA Acting Training Program.