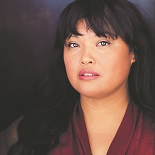 Christine Friale is delighted to make her first mainstage appearance at the Alley. In 2020, she played the Old Woman in The Aves by Jiehae Park at the Alley All New Festival. She has also appeared in other Tony Award®-winning theaters across the country including the Public Theater in NYC, the Denver Center and Utah Shakespeare Festival. She was trained at the MFA Professional Theatre Training Program at the University of Delaware and the BFA Musical Theater program at Boston Conservatory. This spring she guest starred on season 3 of "Magnum P.I." as the infamous Imelda Marcos on CBS. Favorite roles in the theatre include Lolita Luna in Dogeaters, Aldonza in Man of La Mancha, Lady Macbeth, Kate in Shrew, Susie in W;T and Bloody Mary in South Pacific. Christine dedicates her performances to her late parents Fatima and Romulo who inspire her humor everyday. christinefriale.com.