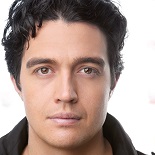 Christopher Salazar happily returns to the Alley Theatre, after appearing in The Humans. In the interim, he played the title role in Macbeth and Orlando in As You Like It. Select credits include: Two seasons with The Oregon Shakespeare Festival: Henry V, The Merry Wives of Windsor, The Way the Mountain Moved and Off the Rails; Eleven productions at The Old Globe; Thieves at The Public Theater (NYC); Portland Center Stage; Barter Theatre; American Shakespeare Center; and the Ovation-nominated and award winning Ameryka with Critical Mass Performance Group; on TV: Robert Torres on Jane, The Virgin. MFA: Old Globe Theatre/USD, BA: UNC- Chapel Hill.