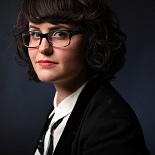 Claire Kiechel’s plays include the haunted (City Theatre's Momentum Festival); Pilgrims (The Gift Theatre; Alley All New Reading Series; The Lark’s Playwrights’ Week 2016; The Kilroys' The List 2016); Lulu Is Hungry with composer Avi Amon at Ars Nova’s ANT Fest 2016; and Some Dark Places of the Earth at The New School for Drama. She has received commissions from Actors Theatre of Louisville and South Coast Rep, and is currently working on her commission from the Alley Theatre about early Christianity. She currently lives between New York and LA where she also writes for television (Netflix's The OA, HBO's Watchmen).