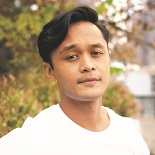 Daniel Velasco is thrilled to be back on stage at the Alley after workshopping the production during the Alley All New Festival. He was most recently seen on Law & Order: SVU, Lucifer on Netflix, the series SOCiAL on Youtube, and will be in the new season of Call Me Kat on Fox. After receiving his theatre training from Fordham University and the London Dramatic Academy he went on to star in a production of Year Zero at the Merrimack Repertory Theatre followed by productions at Primary Stages, The Cherry Lane Theatre, Target Margin Theatre and many others. He would like to thank his mom for her never-ending support, his Tito Miguel for getting him started, and Lucy for making everything better.