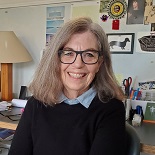 Doris Baizley lives in Los Angeles where she teaches at Loyola Marymount University. She was a founding member of LA Theater Works (originally Artists in Prison), resident playwright for the Mark Taper Forum’s ITP company for young audiences, and dramaturg for its Other Voices Project for theatre artists with disabilities. Her plays include Mrs. California, Shiloh Rules, A Christmas Carol, Tears of Rage, and Sex Sting, developed and produced at theatres including the Mark Taper Forum, ACT Seattle, Alabama Shakespeare Festival, and the Salt Lake Acting Company. Her newest play, Sisters of Peace, was commissioned by and produced at the History Theater in St. Paul MN in April 2019. As story editor for documentary films she has worked with editor Mary Lampson on Emile Norman: by His Own Design, winner of the Miami Gay and Lesbian Film Festival HBO Audience Award, 2007. Most recently she was story editor on Anne Makepeace’s Tribal Justice, seen on the PBS series POV in 2018. She is currently working with experimental filmmaker Rodrigo Reyes on his documentary, Sansón and Me. Her husband Ed Woll is an architect, her son Andy Woll is an artist, and her dog Moe is a dachshund.