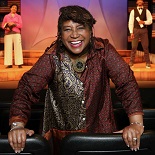 Eileen J. Morris is the Artistic Director of The Ensemble Theatre in Houston, one of the largest African American theatres in the world that owns its facility. She has directed over 87 productions which include 8 world premieres and in January 2021 was awarded Broadway World Houston’s Best Director of the Decade for August Wilson’s Fences. Eileen has numerous directing credits not only in Houston, but in Pittsburgh, directing annually at Pittsburgh's New Horizon Theater. Eileen recently was the associate director for Lynn Nottage’s play Sweat with the Alley Theatre- Houston. Eileen currently serves as Vice President on the board of the Theatre Communications Group, consultant for the Black Theatre Network and advisory board member of the Houston Cinema Arts Society and newly appointed to the ION District Community Benefits Agreement- Community Advisory Council. A proud member of SDC, Eileen is among seven female artistic leaders awarded $250K annually with support from The Helen Gurley Brown Foundation and Northern Stage in support of women artistic directors of professional theaters across the United States. Notably, Eileen holds the distinction of being the only woman in the world to direct eight of the August Wilson Ten Play Cycle. Eileen is honored to participate in the Alley All New Festival as both theatres continue to celebrate their milestone anniversaries.