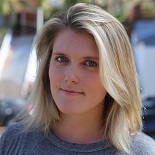 Eliza Clark has developed plays at Manhattan Theatre Club, the Studio at Cherry Lane Theatre, Page 73 Productions, Ensemble Studio Theatre, and others. She has received commissions from South Coast Repertory and Yale University’s O’Neill Studio. Clark was a member of Ensemble Studio Theatre’s emerging writers group, Youngblood, and was the 2010 Page 73 Playwriting Fellow. Most recently, she was a member of Center Theater Group’s writers group. Her play Edgewise was co-produced by Page 73 and The Play Company in 2010 and her play Recall was produced by Colt Coeur at The Wild Project in 2012. Her play Future Thinking was featured on The Kilroy’s List and produced at South Coast Repertory in spring 2016. Edgewise, Recall, and Future Thinking are published by Samuel French. Clark also has written for television including AMC’s “Rubicon” and “The Killing.” She is a writer and co-executive producer on “Animal Kingdom” for TNT.