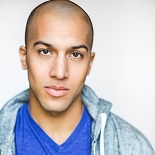 Gabriel Diego Hernández is thrilled to be working at the Alley  and would like to thank Hilary for writing such a beautiful and urgent play and for giving him the chance to help her tell this story. Recent theater credits include El Coquí Espectacular and the Bottle of Doom (Two River Theater), La Canción (Repertorio Español), Dancing in My Cockroach Killers (Puerto Rican Traveling Theater), and the Drama Desk Award nominated CasablancaBox (HERE Arts Center). His one-man show QuarterRican is being developed at the Puerto Rican Traveling Theater in New York City for a public workshop in April. Gabriel hails from Hoboken, NJ and holds two degrees from Yale University, where he met his wife Rachel, with whom he records nostalgic ‘90s hip hop and curates their toddler's Instagram account.