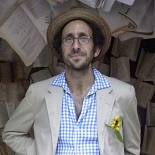 Glen Berger’s plays include Underneath the Lintel (over 450 performances Off-Broadway, several Best Play awards, over 350 productions in U.S. and abroad, translated into 8 languages), O Lovely Glowworm (2005 Portland Drammy Award Winner for Best Script), and Great Men of Science, Nos. 21 & 22 (Ovation Award and L.A. Weekly Award for Best Play), and the musicals [book and lyrics]: On Words and Onwards (Manhattan Theatre Club/Sloan Foundation Fellowship) and A Night in the Old Marketplace (Loewe Award), both with composer Frank London of the Klezmatics.  His television credits include two Emmy Awards (twelve Emmy nominations) and more than 150 episodes for children’s series, including head-writer positions for Arthur (PBS) and Fetch (PBS).  Berger is the bookwriter and co-lyricist for the adaptation of August Rush (with composer Mark Mancina) to premiere in Chicago in 2019 and was the co-bookwriter for Spider-Man: Turn Off the Dark on Broadway (directed by Julie Taymor with music by Bono and Edge of U2), which ran for three years.  His memoir Song Of Spider-Man—the harrowing tale of Turn Off the Dark’s creation—was published by Simon & Schuster in 2013.  He is an alumnus of New Dramatists.