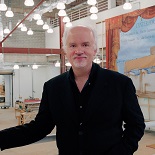 GREGORY BOYD is the former Artis­tic Director of the Alley. During his tenure the Alley rose in national and inter­national prominence, winning the Special Tony Award and experiencing record growth in its Houston audiences, while also trans­ferring its productions to major European Festivals (including two in one season at the Venice Biennale), Broadway, and on tour to 40 American cities. Boyd’s addition of artis­tic associates has enhanced the Alley’s vis­ibility and reputation worldwide; while his commitment to maintaining a resident com­pany of actors has made the Alley unique among American theatre companies. At the Alley, Mr. Boyd produced over 100 new productions of the widest ranging repertoire in the country, among them the premieres of Not About Nightingales by Tennessee Wil­liams (Alley, London, Broadway), Jekyll & Hyde, (Alley, National Tour, Broadway), The Civil War (which he also co-authored), Shakespeare’s Roman Plays (with Vanessa and Corin Redgrave); Robert Wilson’s pro­ductions of Hamlet, When We Dead Awaken and Danton’s Death (with Richard Thomas); Ellen Burstyn in O’Neill’s Long Day’s Jour­ney Into Night and Tony Kushner’s Angels in America Parts 1 & 2 (both directed by Michael Wilson), premieres by Keith Red­din (Synergy); Eve Ensler (Lemonade); and Alley Artistic Associates Edward Albee (The Play About the Baby), Horton Foote (The Carpetbagger’s Children), Ken Lud­wig (The Gershwins’ An American in Paris, Leading Ladies) and Frank Wildhorn (Jekyll & Hyde, Wonderland and The Civil War). At the Alley, he has appeared as an actor in Danton’s Death (Tom Paine) and Cyrano de Bergerac (Cyrano) and directed over 40 productions including: Seagull, Rock ‘n’ Roll, Eurydice, Cyrano de Bergerac, Treasure Island, Subject to Fits, Hitchcock Blonde, Hapgood, The Pillowman, Jekyll & Hyde, Three Sisters, In the Jungle of Cities, After the Fall, The Greeks, One Flew Over the Cuckoo’s Nest, Macbeth, As You Like It, and A Midsummer Night’s Dream. Direct­ing projects outside the Alley have included Our Town at Hartford Stage (Hal Holbrook), Coward’s Design for Living at William­stown (Marisa Tomei, Campbell Scott, Ste­ven Weber), Stoppard’s Travesties at Long Wharf (Sam Waterston, Tom Hewitt) and the premiere of Pulitzer Prize winner Rob­ert Schenkkan’s Lewis and Clark Reach the Euphrates at the Mark Taper Forum in Los Angeles. Boyd has served as Panelist for the National Endowment for the Arts, the Texas Commission on the Arts and the Massachu­setts Council for the Arts. He has taught on the faculties of Carnegie-Mellon, Williams College, the University of Houston, and the University of North Carolina, where he headed the Professional Theatre Training Program. He was educated at the University of California, Berkeley, where he is a Distin­guished Alumnus, and at Carnegie-Mellon.