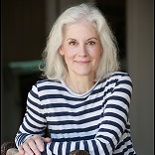 Hallie Foote has most recently been seen in Horton Foote’s, The Roads to Home, Harrison, TX and Daisy Foote’s Him. Other New York productions include, The Orphans’ Home Cycle (Horton Foote’s three act nine hour masterwork), Dividing the Estate, The Day Emily Married, The Trip to Bountiful, The Carpetbagger’s Children, The Last of the Thorntons, When They Speak of Rita, Talking Pictures, Night Seasons, Laura Dennis, The Death of Papa, and The Widow Claire. Hallie has also performed at many regional theaters in Camp David, The Death of Papa, God’s Pictures, To Kill a Mockingbird. Her films include: 1918, On Valentine's Day, Courtship, Paranormal , and Paranormal 5: The Ghost Dimesion. On television Hallie starred in the Turner/Amblin Production of The Habitation of Dragons and guest starred for Showtime in Alone.