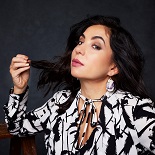 Hilary Bettis is a playwright, TV/film writer, and filmmaker. She hails from a Chicana mother who grew up on the border and a Southern father who grew up Methodist. Her work is a culmination of these cultures, exploring the American identity through a rural Latinx lens.

In television she was nominated for (2018) and won the 2019 Writer’s Guild of America Award for her work on Golden Globe and Emmy Award-winning FX series “The Americans.” She joined the writers' room throughout seasons five and six. Other TV credits include the Hulu miniseries “The Dropout” and Amazon’s “Rodeo Queens.” Bettis is an alumna of the highly competitive Sundance Institute Episodic TV Lab. She’s currently developing projects with Netflix and Starz.

In 2020 Bettis’ play 72 miles to go... was brought to life Off-Broadway with the Roundabout Theatre Company to critical acclaim, The New York Times calling it “poignant” and Vulture calling it “powerful.” The play received the 2019 Edgerton Foundation New Play Award and a National Endowment for the Arts Grant, and was a finalist for the prestigious Susan Smith Blackburn Prize.

Bettis is a graduate of the Lila Acheson Wallace Playwright Fellowship at The Juilliard School. Her plays have been developed and produced all over the country, including at New Georges, The Sol Project, Miami New Drama, Studio Theatre, Alley Theatre, New York Theatre Workshop, and La Jolla Playhouse, amongst others. She is currently under commission at Roundabout Theatre and is writing the Broadway musical book "Lives in Limbo" with Sergio Trujillo, Michelle Rodriguez, and Julio Reyes Copello.