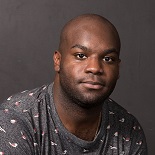 Ike Holter is a 2017 winner of the Windham-Campbell Prize, one of the highest awards for playwriting in the world. Holter is a resident playwright at Victory Gardens Theater, and his work has been workshopped at The Kennedy Center, The Eugene O'Neill Theater Center and The Playwrights’ Center. His work has been produced at the Steppenwolf Garage, The Philadelphia Theater Company, Off Broadway at Barrow Street and Cherry Lane, The Lily Tomlin Center in L.A, True Colors in Atlanta, Water Tower Theater in Dallas, 3oaks in Michigan, and Jackalope, Teatro Vista, A Red Orchid , and The Inconvenience in Chicago. He is the artistic director of The Roustabouts and is a regular performer at Salonathon and The Paper Machete.