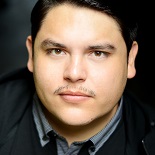 Isaac Gómez is an award-winning Chicago and Los Angeles based playwright and screenwriter originally from El Paso, Texas/Ciudad Juárez, Mexico. He is currently under commission with South Coast Repertory, Denver Center for the Performing Arts, the Alley Theater, LCT3 and IAMA Theatre Company. His plays have been produced and/or developed by Audible Theater, Steppenwolf Theater Company, Primary Stages, Oregon Shakespeare Festival, Goodman Theatre, the Alley Theatre, and many others. He is the recipient of the 2018 Dramatists Guild Lanford Wilson Award, the 2017 Jeffry Melnick New Playwright Award at Primary Stages, and is an inaugural 3Arts “Make A Wave” grantee. His television credits include the Netflix Original Series Narcos: Mexico. He enjoys good bowls of menudo on Sundays (con bolillos not tortillas, porfis) and can slay a game of millennial loteria. He is represented by The Gersh Agency and Redefine Entertainment.