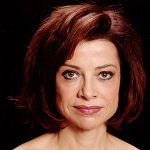 JOSIE DE GUZMAN returns to the Alley having recently appeared as Beatrice in A View from the Bridge, Hippolyta/Titania in A Midsummer Night’s Dream, Clarissa Halshim-Brown in Agatha Christe’s Spider’s Web, Morris in The Nether, Juliana in The Other Place, Kate Keller in All My Sons, Masha in Vanya and Sonya and Masha and Spike, Ruella in Communicating Doors, Penelope Sycamore in You Can’t Take it with You, Lady Angkatell in The Hollow, Club Secretary in Sherlock Holmes and the Adventure of the Suicide Club, Linda in Death of a Salesman, Barbara Amory in Black Coffee, Belinda Blair in Noises Off, Arkadina in The Seagull, Vera Claythorne in And Then There Were None, Barbara Fordham in August: Osage County, Miss Casewell in The Mousetrap, Berthe in Boeing-Boeing, Mrs. Mannerly in Mrs. Mannerly, Mrs. Gibbs in Our Town, Eleanor/Esme in Rock ‘n’ Roll, Maggie Cutler in The Man Who Came to Dinner, Matilde in The Clean House, the title role in Hapgood, as well as After the Fall, Twelfth Night, Sherlock Holmes, And Then There Were None, and House & Garden. Her Broadway career includes Tony nominations for Guys and Dolls and West Side Story, as well as creating roles in Nick and Nora, Runaways, and Carmelina. She won the 2002 Connecticut Critics Award for Anna in The King and I, and has appeared extensively at the Public Theatre (where she created roles in Elizabeth Swados’ Runaways, Lullaby and Goodnight, and The Haggadah), at the Brooklyn Academy of Music (Missionaries) and Off-Broadway (Tamara, Once Removed). Her regional theatre appearances include Hartford Stage (Diosa, Our Town), Great Lakes Theater (She Loves Me), and The Denver Center (Man of La Mancha), as well as such varied classical roles as Carmen, Viola, Varya, and Beatrice. Her films include Exiles in New York, FX, and FX2, while television appearances include “Miami Vice”, “The Cosby Show”, “Third Watch”, “All My Children”, and “Guiding Light”. Her recordings include Lullabies for Everyone and Nanas Para Todos (both sold at cdbaby.com and iTunes), as well as the cast recordings of Guys and Dolls, Carmelina, and Runaways.