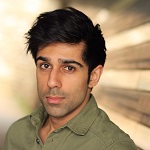 JASPAL BINNING is a New York based British-Indian actor/director/producer/creator represented by Kyetay Beckner of The Gersh Agency. His acting accolades include being a series regular on the Netflix Series “Brown Nation,” a lead on Lifetime Movie Network’s “I Love You But I Lied” and a lead in the independent movie “Ovum.” As a director he won the Best Director award (Shared) at New York Television Festival for “Doomsday.” They also went on to win Best of Festival at ITV Fest, Best Pilot at Brooklyn Webfest and HollyWeb Festival. He was selected for The Independent Magazine’s 10 Filmmakers to watch for “Doomsday.” He also served as an executive producer on “Doomsday” as well as an associate producer on the independent movie “Ovum.” It won Best Picture at the Big Apple Film Festival (chosen by a jury from IndieWire, HBO & Film Buff), Best Comedy at The Manhattan Film Festival and Best Picture at The Brooklyn Girl Film Festival. It was picked up for distribution by Sony’s The Orchard and was released internationally on April 11th on VOD, DVD and digitally on iTunes, Google Play and Amazon. As a creator he just received initial funding from OneX studios production company to produce his new TV sitcom called “Where you from?” and is hard at work on his next conceptual TV series called “Asian Invasion” along with his British-Indian Independent Feature concept “Bipolar.”