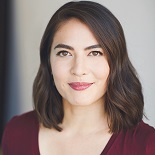 KIM BLANCK is overjoyed to be at the Alley Theatre after understudying and performing the role of Viola in Twelfth Night this summer at The Public Theatre's Shakespeare in the Park in New York City. Other New York credits include the World Premiere of the new musical Folk Wandering (Pipeline Theatre Company) and the music sketch comedy show Political Subversities (the People’s Improv Theater, the Bell House); workshops at the Public Theater, Atlantic Theater Company, New York Theatre Workshop, Ars Nova and Playwrights Realm; as well as The Tempest, The Winter’s Tale, Much Ado About Nothing, and Twelfth Night with The Back Room Shakespeare Project. Regional credits include A Midsummer Night’s Dream (Tantrum Theater), Cornerstone and Chasing the Song (both La Jolla Playhouse); screen work includes the upcoming feature films Friday Afternoon, Thorp, and Women Who Kill (2016 Tribeca Film Festival), as well as the web comedy Keep Me Posted (Pitch Her Productions). Also a writer and producer, her comedy “Half Full” was a selection for the 2017 Refinery29 + TBS Comedy Lab, and 2016’s “Basic Witch” can be streamed on Amazon Prime. Currently a member of the Playwrights Horizons Theater School faculty at NYU, she is a graduate of NYU Tisch and the MFA Acting program at UC San