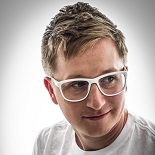 Kyle created and executive-produced the television series Valor, which premiered on The CW network and is now available on Netflix, as well as the short-form streaming series Lost Generation. Currently he serves as Co-Executive Producer on Star Trek Discovery. In the world of features, Kyle penned Purple Hearts (coming soon to Netflix), Armless (an official selection of the Sundance Film Festival), and Saint Janet (available for streaming on Amazon Prime).

In addition to his work as a writer, Kyle leads the rock band Sky-Pony – a collaboration with his wife Lauren Worsham. Their debut LP Beautiful Monster is available from Knitting Factory Records. Kyle was also a member of the now-retired band The Fabulous Entourage which appeared in the Whitney Biennial and opened for such groups as Hot Chip and We Are Scientists. Kyle is co-founder and board president for the philanthropic organization Places Please Project, which is committed to raising and distributing rent relief to help theater workers with housing insecurity in the wake of the pandemic. For more info on Kyle, check out kylejarrow.com.