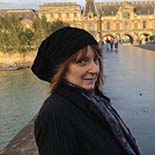 Liz Duffy Adams’ play Or, premiered Off Broadway at WP Theater and has been produced over 75 times, including at Magic Theater, Seattle Rep, and Roundhouse Theatre. She’s a New Dramatists alumna and has received an Edgerton Foundation New Play Award, Women of Achievement Award, Lillian Hellman Award, New York Foundation for the Arts Fellowship, Weston Playhouse Music-Theater Award, Massachusetts Cultural Council Fellowship, and the Will Glickman Award. Her Artistic Stamp virtual "play" in letters, Wild Thyme, was nominated for a Drama League Award in 2021.

Adams has an MFA from Yale School of Drama and a BFA from New York University and was the 2012–2013 Briggs-Copeland Visiting Lecturer in Playwriting at Harvard University. She has dual Irish and American citizenship and lives in New York City, on land that once belonged to the Lanape, and in Western Mass on unceded Pocumtuc and Nipmuc land.