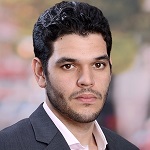 Luis Quintero is thrilled to returning to the Alley after making his  Alley debut as Oscar in Sweat. Other credits include Macbeth, Cyrano, and Into the Woods at Hudson Valley Shakespeare Festival; Twelfth Night at Two River Theater; American Mariachi at DCPA and The Old Globe San Diego; The River Bride at Stages Rep; and Around the World in 80 Days at A.D Players. In addition to performing, he assistant directed and fight choreographed As You Like It at Fourth Wall Theater as well as presented his first one person show Hip Hop Therapy with HVSF. BFA UNCSA.