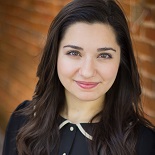 Melissa Molano is a member of the Resident Acting Company! Previous Alley roles include 72 miles to go. . .(Eva), Sense and Sensibility (Lucy Steele/Thomas), the Alley Digital Season production of Medea, The Winter’s Tale (Dion/Dorcas), Murder on the Orient Express (Countess Andrenyi), A Christmas Carol (Belle), Twelfth Night (Attendant). She was featured in Houston Press’ “Actors to Watch” in 2017 and received both a Houston Theatre Award for “Best Breakthrough Performances” and a Laura Award from Landing Theatre Company in 2016. Other previous roles include: Stages Theatre: The River Bride (Belmira), Luna Gale (Lourdes), I and You (Caroline),The Book of Maggie (Maggie). An alumna of SHSU Musical Theatre and TPAP. She also does voiceover for video games and in various animated series and movies that stream on HiDive and Netflix. You can follow her on Instagram/Twitter: @melissacmolano.