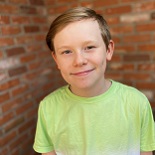 Mack Hutchison is extremely excited to be returning to the Alley. This is his fourth year performing in A Christmas Carol. He has played Cider Child, Tiny Tim, and last year, he played Turkey Boy alongside his mom, dad, and younger brother. He is currently a sixth grader at T.H. Rogers Middle School. In his spare time, he enjoys making stop motion films, playing drums, and drawing.