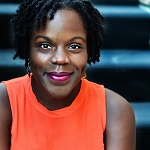 MARA MCGHEE is excited to be included in Alley Theatre’s Alley All New Festival 2018. She is the cofounder and former Artistic Director of All In Productions, located and thriving in Milwaukee, WI. Her favorite directing credits include Gym Class Heroes (The Landing Theatre Company’s Redemption Series), Little Shop of Horrors (All In Productions), A Behanding in Spokane (The World’s Stage), Desire Is Death (The World’s Stage), along with smaller projects with Milwaukee Comedy and Sketch 22. A few acting credits include Incredible Darling (Fade 2 Black Festival), Hair (Skylight Music Theatre), Suddenly Last Summer (Uprooted Theatre), The Colored Museum (Lights! Camera! Soul!), Home: A Musical X-File Case S4E2 (Smithereen Productions), and [title of show] (Theatrical Tendencies). She is an improviser and was a mainstage and touring member of TIM: The Improvised Musical, a regular performer in ComedySportz Milwaukee, and can currently be seen in ComedySportz Houston. Her most notable television and film appearances include: “Extra” in Mr. 3000, “Featured Taster” in TMJ4 Milwaukee’s local news segment “What’s The Deal With Greek Yogurt?”, and “Member of the McGhee Family” on Family Feud. She enjoys working as the Community Programs Coordinator for the Education and Community Engagement department at the Alley, where she engages with all types of theatre with all types of people. Peace, Love, and Light!