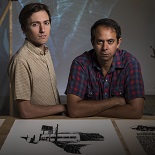 Nick Vaughan & Jake Margolin are Houston-based interdisciplinary artists.  Their 50 States Project, a series of fifty installations that connect instances of queer life from each state’s pre-Stonewall history to contemporary regional queer experience, will be completed over the next four decades. Their show The Scene: Houston (1969-1981) premiered at Houston’s Devin Borden Gallery in 2018, and 10 Political Gestures, an experimental film created in collaboration with drag queens in Oklahoma was commissioned by Aurora Picture Show in 2018.  Nick & Jake are developing 50 States: Arkansas which will premiere at Brooklyn’s Invisible Dog Art Center in 2019, and will have their first solo museum show 50 States: Oklahoma, Texas, Colorado, & Wyoming at Oklahoma State University Museum of Art, 2019.

Nick & Jake are recipients of a New York Foundation for the Arts Fellowship, a Tulsa Artist Fellowship, and grants from the MAPFund, the IdeaFund, and the Houston Arts Alliance.

Nick & Jake are members of the internationally acclaimed Brooklyn-based experimental theater company The TEAM and have frequently collaborated as visual designers with the choreographers Faye Driscoll and Yoshiko Chuma.

The New York Times recently described Jake as “on the cusp of middle age” which Nick is going to lord over his slightly more mature husband for, like, ever.