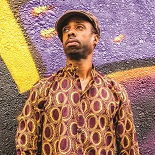 NSangou Njikam is an actor and playwright from Baltimore, MD.  He was last at the Alley in 2017 with the world premiere of his play Syncing Ink.  Acting credits include Everybody Black (Humana Festival), Henry V (Classical Theatre of Harlem) and Deep Azure (Congo Square Theatre).  His plays include Re:Definition, I.D., and his latest work Turning Up With God on a Tuesday.  NSangou is a member of the 2015 Emerging Writers Group at the Public Theater.  He received his BFA in Acting from Howard University.