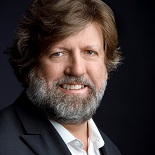 Oskar Eustis has served as the artistic director of The Public Theater since 2005, after serving as the artistic director at Trinity Repertory Company in Providence, RI from 1994 to 2005. Throughout his career, Eustis has been dedicated to the development of new work that speaks to the great issues of our time and has worked with countless artists in pursuit of that aim, including Tony Kushner, Suzan-Lori Parks, David Henry Hwang, Lin-Manuel Miranda, Richard Nelson, Rinne Groff, Tarell Alvin McCraney, and Lisa Kron. He is currently a professor at New York University and has held professorships at UCLA, Middlebury College, and Brown University.