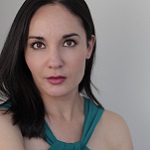 Patricia Duran is a local actor and founding artist of Gravity Players where she performed in The Last Days of Judas Iscariot, which was recognized by the Houston Chronicle as one of the best theatre productions in 2017 and by the Houston Press Awards for Best Ensemble. Duran is also a founding company member of Mildred’s Umbrella Theatre where she has acted, directed, and designed. MU credits include: The Maids, The Drowning Girls, Dracula, Cloud Tectonics, Foxfinder, and more. Houston Theatre credits: Catastrophic Theatre (The Designated Mourner, Middletown, The Pine); Obsidian Theatre (The Motherfucker With the Hat); Main Street Theater (Men On Boats, Love and Information); Alley Theatre (Our Lady of 121st Street, A Christmas Carol). She has also acted with Stages Repertory Theatre in Blood Wedding and The Cook with alternating performances in English and Spanish. In NYC,  Duran served as Associate Artistic Director of Playhouse Creatures Theatre where she acted and directed. It was also at PCTC where she was instrumental in developing Little Creatures Act Out, a free youth program that teaches theatre and social skills to New York City’s homeless and low income children. Off-Broadway: The Libertine. NYC Credits: Love Song (Access Theatre); Tennessee Williams’ Hello From Bertha/The Pink Bedroom (Playhouse Creatures Theatre), One Night in the Valley (INTAR), and Porco Morto (Mabou Mines) written and directed by Lee Breuer. Duran has also acted regionally in Virginia Repertory Theatre’s productions of Legacy of Light and Boleros for the Disenchanted directed by Bruce Miller. Duran was recognized by American Theatre magazine as one of 20 Theatre Workers You Should Know. She works as a voiceover actor for Sentai Filmworks. Duran teaches theatre at Westbury Christian School. She is a proud member of Actors’ Equity Association.