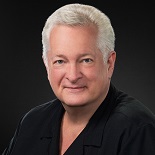 Paul Hope has appeared on the Alley stages for 28 seasons in a wide range of roles, recently including Malvolio in Twelfth Night; Serge in Art; Gavin in House and Garden; Sergeant “Froggy” Le Sueur in The Foreigner; Mr. Kirby in You Can’t Take it With You; Edward Raynor in Black Coffee; Richard in Hay Fever; and Beverly Carlton in The Man Who Came to Dinner; among many others. His musical theatre roles include Rohna in Grand Hotel and Max in the Sound of Music at Casa Mañana in Fort Worth; and Arvide in Guys and Dolls, and J.P. Morgan in Ragtime at Theater Under the Stars. He took over for John Lithgow as the Narrator of Carnival of the Animals for Houston Ballet, Pennsylvania Ballet, and Tulsa Ballet. He was the Artistic Director for Bayou City Concert Musicals, which  presented concert stagings of Follies; She Loves Me; 70 Girls 70;  Fiorello; Pal Joey; On the Town; Gentlemen Prefer Blondes; Finian’s Rainbow; One Touch of Venus; The Pajama Game; New Girl in Town; Bells are Ringing; and Promises, Promises. He is the Artistic Director for Paul Hope Cabarets, which keeps the Great American Songbook alive at Ovations and will appear as Henry in The Fantasticks for Stages Repertory Theatre in the new year.