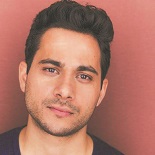 Ricardo Dávila (they/them) is a graduate of NYU Tisch School of the Arts and Yale School of Drama. They played the Series Regular role of “Eladio" opposite Julianna Margulies on AMC's Dietland, and starred in the independent film The Land Of Owls. As a Guest Star, Ricardo has been seen on New Amsterdam (NBC), Alternatino with Arturo Castro (Comedy Central), Chicago P.D. (NBC), and Instinct (CBS). Theatre credits include: For A Brief Moment I Was Something Else (HERE Arts), The Merm (Ensemble Studio Theatre). As a writer, Ricardo was a resident at SPACE on Ryder Farm 2021 Creative Residency. They are represented by Nicolosi & Co and Authentic Talent & Literary Management.