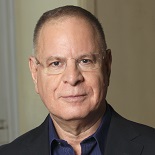 SANFORD (SANDY) ROBBINS is the founder and Producing Artistic Director of Delaware’s Resident Ensemble Players (REP). Other theatres for which he has directed include Oregon Shakespearean Festival, Utah Shakespearean Festival, Indiana Repertory Theatre, Illinois Shakespeare Festival, Los Angeles Shakespeare Festival, and American Players Theatre, as well as several productions for the Alley, including November and You Can’t Take It With You (awarded “2013 Best Ensemble of the Year” by the Houston Press), and multiple productions for Milwaukee Repertory Theatre as Resident Director and subsequently as a guest including True West, The Voysey Inheritance, Bad Dates, Lombardi, A Christmas Carol, The Birthday Party, and Cyrano de Bergerac. Mr. Robbins has directed the premieres of Sam Shepard’s plays for the national theatres of several countries, including the Moscow Art Theatre Studio and the National Theatre of Cyprus. His production of Shepard’s The Tooth of Crime received the Thalia Award for Best Production in Finland, an award won the previous year by Ingmar Bergman. REP productions include The Hostage, The Imaginary Invalid, She Stoops to Conquer, Dancing At Lughnasa, A Midsummer Night’s Dream, The Skin of Our Teeth, Wit, To Kill A Mockingbird, Things We Do For Love, The Elephant Man, You Can’t Take It With You and the world premieres of Theresa Rebeck’s O Beautiful and Fever. He has taught acting, voice, verse speaking, and period style at Carnegie-Mellon University, Los Angeles City College, and The American Academy of Dramatic Arts. He serves as text and verse speaking coach for Shakespeare and other classic plays at many professional theatres (including the Alley Theatre’s 2003 production of Hamlet). Mr. Robbins received his BFA and MFA from Carnegie-Mellon University. In addition to his work in the theatre, he designs programs and trains leaders for Landmark Worldwide and its subsidiary, Vanto Group.