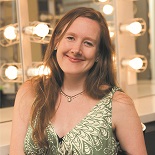 Sarah Ruhl is an award-winning American playwright, author, essayist, and professor.
Originally from Chicago, Ms. Ruhl received her Bachelor of Fine Arts in English at Brown University, as well as her MFA in playwriting, where she studied with Paula Vogel. She also spent a year of graduate work studying English literature at Pembroke College, Oxford. An alum of 13P and of New Dramatists, she won a MacArthur Fellowship in 2006 and the Steinberg Distinguished Playwright Award in 2016. She was the recipient of the PEN Center Award for a mid-career playwright, the Whiting Writers award, a Helen Merrill Award for Playwriting, the Feminist Press’ Forty under Forty award, and a Lilly Award. She proudly served on the executive council of the Dramatist’s Guild for three years, and she is currently on the faculty at Yale School of Drama.
Her plays include Stage Kiss; In the Next Room, or the vibrator play (Pulitzer Prize finalist, Tony Award® nominee for best new play); The Clean House (Pulitzer Prize Finalist, 2005; The Susan Smith Blackburn Prize, 2004); Passion Play (Pen American award, The Fourth Freedom Forum Playwriting Award from The Kennedy Center); Dead Man’s Cell Phone (Helen Hayes award); Melancholy Play (a musical with Todd Almond); Eurydice; Orlando; Demeter in the City (NAACP nomination); Late: a cowboy song; Three Sisters; Dear Elizabeth; The Oldest Boy; and most recently, For Peter Pan on her 70th Birthday and How To Transcend a Happy Marriage. Her plays have been produced on Broadway at the Lyceum by Lincoln Center Theater, Off-Broadway at Playwrights’ Horizons, Second Stage, and at Lincoln Center’s Mitzi Newhouse Theater. Her plays have been produced regionally all over the country, with premieres often at Yale Repertory Theater, the Goodman Theater, Berkeley Repertory Theater, and the Piven Theatre Workshop in Chicago. Her plays have also been produced internationally and have been translated into over twelve languages, including Polish, Russian, Spanish, Norwegian, Korean, German and Arabic. She is also the author of four books: Smile: The Story of a Face, Letters from Max: A Book of Friendship, 44 Poems for You, and 100 Essays I Don’t Have Time to Write, which was a Times Notable Book of the Year.
Of her work, Sarah has said that she tries to “interpret how people subjectively experience life…Everyone has a great, horrible opera inside him. I feel that my plays, in a way, are very old-fashioned. They’re pre-Freudian in the sense that the Greeks and Shakespeare worked with similar assumptions. Catharsis isn’t a wound being excavated from childhood.” She writes about fish that walk, dogs that witness family tragedy, a dead man whose cell phone won’t stop ringing, and a woman who turns into an almond.
She lives in Brooklyn with her husband, and their three wonderful children: Anna, William, and Hope.