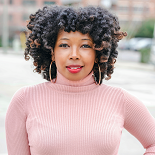 ShaWanna Renee Rivon is an award-winning and nationally renowned playwright and producer. ShaWanna’s success grew with urban plays such as Cheaper to Keep Her and Marriage Material, which starred Vivica Fox, Brian McKnight, and Tionne “T-Boz” Watkins (of “TLC”), both of which toured nationally. As an Actor, ShaWanna starred as a series regular on cartoon shows such as Strawberry Shortcake (as Raspberry Torte), The Bratz (as Sasha), and The Care Bears (as Cheer Bear) ShaWanna earned her BFA in Playwriting and Dramaturgy from the University of Houston. As a developing creative, ShaWanna discovered her niche and artists mission: to create period-piece comedies centered around the lives of Black women. In this, she has begun the development of her 7-play cycle, the first of which is Old Black and White Hollywood, about a 1950’s Black woman comic who desires to become the first Black female movie star. Old Black & White Hollywood was developed with Matt Chapman, Suzan-Lori Parks and Theresa Rebeck and won the Edward Albee Playwriting Award. The second installment of her 7-Play Cycle, Power to the Queendom, was developed with the Rec Room Writers and. Set in 1970s Houston, the script about a group of female Black Panthers is loosely based on a true story. The third installment of the 7-play cycle, You’re Cordially Invited to Sit-In is about the 1960 sit-in demonstration that took place in Houston by Texas Southern University students, will have its world- premiere at Stages Theatre Spring 2022. ShaWanna is currently under commission with the Alley Theatre developing a play based on jazz musician Arnett Cobb.