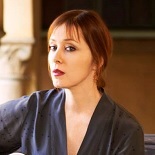 SUZANNE VEGA is a New York based singer/songwriter who has sold more than 7 million albums over the course of her career. She began studying ballet at the age of nine and majored in modern dance at the High School of Performing Arts. She has a degree in English Literature and Theater from Barnard College. She also hosted the Peabody Award winning show “American Mavericks” about classical composers and has written articles for The New York Times and The London Times. Since her debut album in 1985, she has been nominated for seven Grammy awards, winning two for Best Art-Direction and Best Engineering Non-Classical. Her song “Luka” about child abuse was a world-wide hit and won MTV’s Best Female Video. Her song “Tom’s Diner” was used in the refinement of the MP3, earning her the nickname “The Mother of the MP3.” Her hit song “Tom’s Diner” has since been remixed nearly 100 times (by artists including Britney Spears, Tupac, and Destiny’s Child). Suzanne tours constantly and plays sold-out concerts in many of the world’s best-known halls.