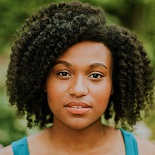 SYDNEY HAYGOOD is excited and honored to be making her Alley Theatre debut in Twelfth Night. She recently graduated from Lamar University with a B.S. in Theatre and Dance. While attending Lamar she became SAFD certified, with Recommended Passes, in unarmed stage combat and rapier & dagger. At Lamar, Sydney was in Romeo and Juliet where she played Mercutio and in her last show, she played Gwendolen from The Importance of Being Earnest. Sydney would like to thank her family and friends for all their love and support, and the Alley for letting her be a part of this amazing production.