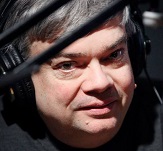 Terry Teachout is the drama critic of The Wall Street Journal, the critic-at-large of Commentary, and the author of “Sightings,” a biweekly column for the Journal about the arts in America. He also writes about the arts on “About Last Night” (www.terryteachout.com), his blog, and is a panelist (with Peter Marks and Elisabeth Vincentelli) on Three on the Aisle, a bimonthly podcast hosted by American Theatre magazine. Satchmo at the Waldorf is his first play. An earlier version of the play was premiered in 2011 in Orlando, Florida. The world premiere was presented in 2012 in Lenox, Massachusetts, and New Haven, Connecticut, and Satchmo has since been produced Off-Broadway and throughout America. Billy and Me, his second play, was premiered in 2017 at Palm Beach Dramaworks. He made his professional directing debut in 2016 with Palm Beach Dramaworks’ production of Satchmo at the Waldorf.

Teachout’s latest book is Duke: A Life of Duke Ellington. He received a Guggenheim Fellowship in 2012 to support its writing and was a MacDowell Colony Fellow that same year. His previous books include Pops: A Life of Louis Armstrong, All in the Dances: A Brief Life of George Balanchine, and The Skeptic: A Life of H.L. Mencken. He has also written the libretti for three operas by Paul Moravec, The Letter (premiered by the Santa Fe Opera in 2009), Danse Russe (premiered by Philadelphia’s Center City Opera Theater in 2011), and The King’s Man (premiered by Kentucky Opera in 2013). He played jazz bass professionally in Kansas City before becoming a full-time writer. He lives with his wife Hilary in New York City and Connecticut.