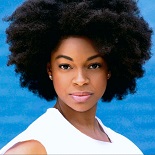 Tiffany Nichole Greene is incredibly thrilled and honored to be directing her first full production at the Alley Theatre. Tiffany is a freelance director and Resident Director of Hamilton. She is a leader, a creator, and an aggressive explorer of the human condition as it relates to relationships and the injustices of this world. Tiffany is an alum of the Lincoln Center Directors Lab and Soho Rep Directors Lab. Her work has also been a New York Times Critics Pick. Tiffany has directed at theatres such as Goodman Theatre, Alabama Shakespeare Festival, Octopus Theatricals, Portland Center Stage, Guthrie Theater, Dallas Theater Center, Trinity Repertory Company, and Barrington Stage. She holds an MFA from Brown University/Trinity Rep and is a proud member of SDC. TiffanyNicholeGreene.com.