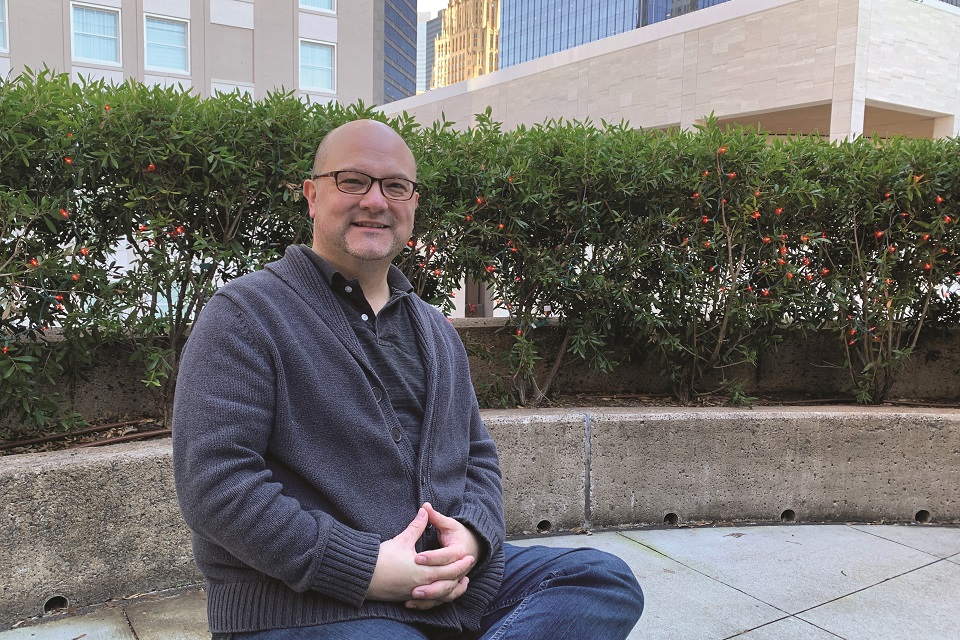 This season, we are proud to spotlight members of the Alley Theatre family as they reach milestones onstage and behind the scenes. Each program will feature a member of the Alley’s staff or company on the occasion of a significant landmark in their career. Literary intern Henry Nash interviewed Director of Events and Operations, Dennis Draper, in honor of his 25th year at the Alley.

Henry Nash: So, tell us the story of how you first came to the Alley.

Dennis Draper: I was at the University of Houston, and I had been invited to come to the Alley for free. But I couldn’t find anybody to go with me and I was too scared to drive downtown. Shortly after that, a friend of mine who worked here invited me, and I saw Our Town. I was blown away. She got me an interview with the Box Office, Ruthie hired me—Ruthie Rodriguez from the Box Office—and that’s how it started. I was here for a week and screwed something up on a Friday night. I left crying. I planned on quitting the next day and Ruthie talked me out of it. That’s what happened—it’s all her fault.

HN: How did you first get involved with what you do now, Events and Operations?

DD: I did group sales for a few years and realized that my talents weren’t in the Marketing Department (laughs). The Managing Director at the time, Paul Tetreault, met with me and said, well, if you had another job at the Alley that you could create, what would it be? And so I said, well, we don’t have anybody that’s in charge of events, and we didn’t have a building manager, and we didn’t really have anybody focusing on things like security. So I made a list of five different jobs, and he took the list and said “that’s great!” And stuck a title at the top and just made me do all of it (laughs).

HN:Was there a moment, early on, when you remember falling in love with the Alley?

DD: I fell in love with the Alley when I first started working here, because I knew the history. And one of the things that I’ve done over the last 25 years is I’ve really jumped into the archives and done all of my research about Nina Vance, and how she started the theatre. I just love the energy of this place. Everything about the art that we create, about the reason we’re all here. I love to watch the rehearsals. I love to watch the shows—sometimes multiple times, so you see the difference between the beginning of the performance and the end of a run. It’s pretty exciting as a theatre person.

HN:What are some of your favorite shows that the Alley has put on during your time here? You mentioned that Our Town was the first Alley show you ever saw.

DD: It’s funny. I absolutely hated that play before I saw it at the Alley. I had only seen it done at high schools and community theatre, and I thought, “why in the world would anybody do this show?” And so, I’m here seeing it at the Alley, the first show I’d ever seen here—and, really, one of the first professional productions that I’d seen. And I understood it for the first time and I was in tears by the end of it. It was a completely different experience.

I saw Michael Wilson’s production of Streetcar Named Desire, which is once again a show that I understood more seeing that production of it. I mean, Annalee Jeffries played Blanche. And I will never see another production where I will ever imagine a Blanche being as amazing as her performance in that. We saw the entire seven hours of Angels in America in the Neuhaus, which is the first time it had ever been done in the round. Tony Kushner was here for it, back in the nineties. And, y’know, I get chills thinking about it now. It was just unreal seeing that production, and I watched it, all seven hours, multiple times. And sitting through it was like nothing, every time.

HN:There have been some changes at the Alley recently. Is there anything, looking forward, that gets you excited about the future?

DD: I’m extremely excited about the possibilities. I’m very involved in other theatres in Houston, the smaller theatres. And I’ve been involved ever since I was at the University of Houston in the theatre program. I was there when Catastrophic was originally Infernal Bridegroom. I was there when that was founded, with Jim Parsons and that whole group. I’m excited about the diversity, and I just am excited about having a new person in town, somebody that’s got fresh ideas, and I’m really looking forward to what he decides to program. I’m also a huge fan of the resident company idea, so that excites me, that he is not only a fan of it, but it looks like he’s going to make it more diverse and larger. We have such great support in this city from our donors, which gives the Alley a unique opportunity to play in ways that the smaller theatres can’t. But, hopefully, we’re gonna bring them in and let them be a part of it as well.

DD: One of my favorite people that I ever worked with was our dramaturg back in the nineties, his name was Travis Mader. He was the kinda guy that would literally put on a gorilla suit and hide underneath your desk to scare you. And I do remember once he put a fake iguana on the back of the bathroom door, so that when you shut the door, all you could see was this iguana, and that really scared a lot of people in administration. I have lots of great stories, though. Even stories that I’m not a part of. One of my favorite stories ever is when they first founded the Alley at the old dance studio, somebody had donated the wood for them to use. But they ran out before they finished all the platforms, so Nina Vance literally sent them to her home and had them dismantle her sundeck to finish it. To me, it just shows you the dedication, and I see that in a lot of people that work here right now. I think that was sort of established with that sundeck.

HN:Some of our audience might not know this, but you’re very involved in the broader Houston theatre scene. Could you talk about some of that work and what it means to you?

DD: Like everybody that starts off in theatre, I was originally wanting to be an actor, and then I realized I’m not that good (laughter). I enjoy directing a lot. I’m also good at the business end of things, administration. So I’ve helped a lot of theatres with their boards over the years. I’ve been on the board of Mildred’s Umbrella Theatre Company, of an older company that was called Unhinged that’s no longer here. And I’ve acted everywhere from Mystery Café, which is a really crazy dinner theatre, to the University of Houston stage, and some small festivals and things, and I had a blast doing it. I will forever be involved as much as I can in the theatre community, which is one of the things that I think is most important moving forward, is to try to strengthen the Houston theatre community as a whole. A lot of the problems we’ve had in the past year or so, I think, have really awakened an energy in the community to make us want to be more of a collaborative group. And so, I’m hopeful for all that. I’m excited about it.

HN:Rob Askins is also from the Houston area. What does it mean for the Alley to be producing artists from Texas?

DD: One of the most exciting things that has happened since I’ve been at the Alley, in the 25 years, is the Alley All New program. The exciting thing as a theatre artist is to see new work that not only starts with workshops where you work, but then you see it have a life after it leaves here. And to have somebody, like Rob, who’s from Texas, you get to see all the work that you totally relate to. Beth Henley’s coming up in April, and she’s one of my all-time favorite playwrights, because her crazy families in her plays are really my crazy family in real life. So, I mean, how exciting is that? I’ve had some of the best moments walking into the lobby and seeing playwrights that I’ve admired for years, here. I used to sit in the back row, next to Horton Foote, because he was here for every production, almost every performance, sitting in the back row, and nobody knew. He’s actually my all-time favorite playwright. He’s such a sweet man, I’m in love with his family. I named my cat Horton.

His daughter actually gave me my cat, so I asked her permission before I named him Horton. I mean, who can say that? Who can say that they got to hang out with their favorite playwright and then his daughter gave you a cat?

DD: I really would love to say thank you to people like Nina Vance and Margo Jones, who I wish to God I had met. And Iris Siff. And to my friends that I work with. I’m very thankful to have all of these people in my life. Working in the theatre, you live most of your life in this space and you go home just to sleep. I’ve been through everything here. I’ve been through the birth of nieces and nephews and, actually, the birth of my brother while I worked in the Box Office in ’94. And through friends’ marriages. This place is tied to my life, and I’m very thankful for that. And I just hope that the audiences can see this place as more than just the beautiful art onstage.