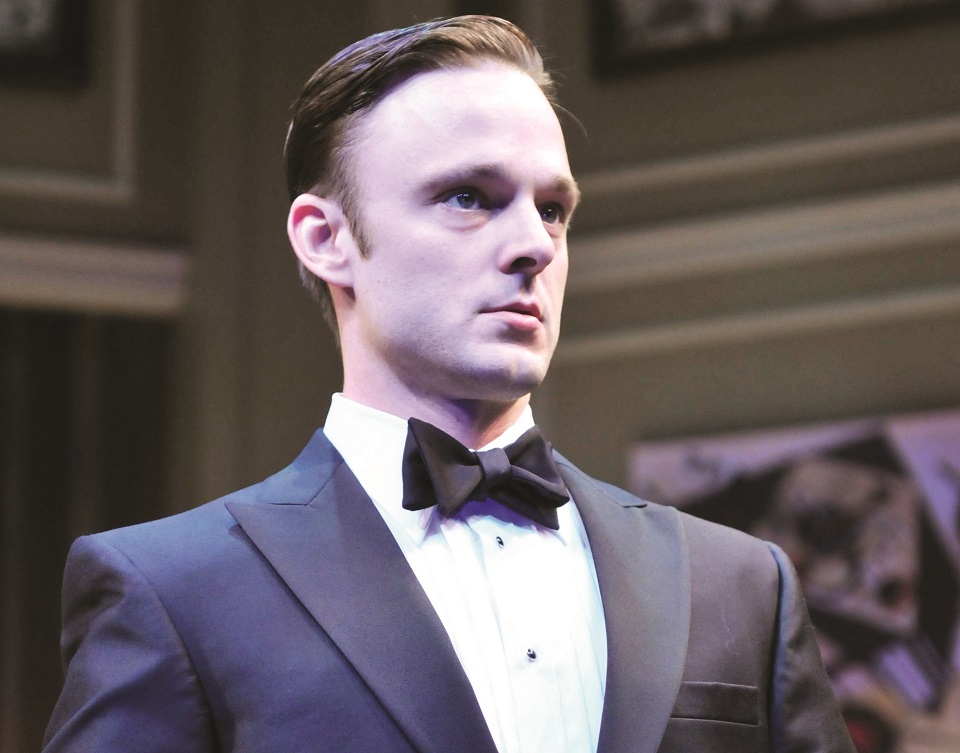 We are proud to spotlight members of the Alley Theatre family as they reach milestones onstage and behind the scenes. Literary intern Henry Nash interviewed Alley Resident Company member Jay Sullivan in honor of his 40th show at the Alley.

Henry Nash: To start us off, tell us about some of your earliest shows here at the Alley.

Jay Sullivan: My first show at the Alley was Eurydice by Sarah Ruhl [2009], and I played Orpheus. It was an audition in New York through my agent. The first show I did when I joined the company in 2012 was Black Coffee, an Agatha Christie mystery with many members of the Resident Company, which was really exciting. And then that same season, I got to play Merrick in The Elephant Man. And that was harder work than I’d ever done before. But I felt so supported by every department in the theatre, and it was a big moment of growth for me as an actor.

HN: When did you first feel that the Alley could become an artistic home for you?

JS: I remember one day in rehearsal, there was this little devil baby-doll prop, and they had given it a costume to match one of the other actors in the play. And the director asked if they could have a devil baby sans chapeau [without hat] and, instantly, props had another one on-hand. People are more prepared, more capable, and doing more specific and precise work here than anywhere.

HN: What does it mean to you to be a part of a resident company?

JS: The Alley’s resident company is my family. They’re some of the finest actors I’ve ever seen. And you have a shorthand with a company because you know each other so well. You don’t have to build relationships to start rehearsing the play. And working with your family all the time means that the work can elevate more and more each time. You have more latitude to take risks. And they’ll keep you in check if you’re repeating yourself. There’s an artistic benefit but also a sense of family and security that, as a freelance actor, is hard to find.

HN: What excites you about Quack? And what are you finding challenging?

JS: Without giving too much away, the role I play is pretty aggressively challenging toward the cultural consciousness of the moment—a long distance from my personal point of view—and that’s incredibly exciting. I read somewhere once that theatre’s supposed to “take us further into our lives.” Challenging our points of view is a great way to do that, and I feel like my character gets to serve that in a really fun way.

HN: Could you talk about the differences between working on a piece of work that has been set, like A Christmas Carol, versus acting in a very new play like Quack?

JS: I’ve always found that there’s nothing sexier than working on a new play with a playwright in the room. You’re one of the first people approaching a part, and you’re responsible for making it fit with the rest of the story. It’s nerve-wracking because you want to give the playwright what they want, but the script speaks to you and you have to do what it tells you, too.

JS: We were doing Around the World in 80 Days, and I was playing nineteen different characters. I had thirty six quick changes for costume. There was this bellhop character that wheeled a wagon out onto the stage, stamped a passport, and disappeared multiple times. We were in our second preview. I did my entrance and exit, and then proceeded all the way backstage, around, underneath, to the vom to make my next entrance as another character—had done my costume change. And I’m looking at the stage, hearing the dialogue, and I know that I’m supposed to come in from stage left again with my wagon in my bellhop costume in about… seven seconds. So I sprinted and started trying to get stuff back on, and I could hear my cue as I’m running into the wing, and I didn’t even have time to get the wagon. I just went out there sort of holding part of my costume, said my line sheepishly, and then went off again. The moment of looking at the stage from a good fifty yards away, knowing that you’re supposed to be up there now—it was harrowing. But it was all in good fun; it’s live theatre.

HN: Is there anything else you’d like to add, looking back over your forty productions?

JS: My friends and family that work here at the Alley are the most beautiful and capable theatre-makers I’ve ever known. And our audience is so generously participatory in what we do. They come and listen to these stories and carry them out into the community. It’s the best audience I’ve found anywhere in the country. I am home here and I’m enormously grateful to my family at the Alley.