David Molina (Quixote Nuevo) is a multidisciplinary composer, musician, and sound designer based in San Francisco. You can explore and listen to his work at www.drmsound.com and www.instagram.com/david_r_molina. Find more information about his group Impuritan at www.impuritan.net.

Michael Locher: David, our audiences really loved Quioxte Nuevo, and your sound and music were a huge part of that experience. Like a lot of composers who work in theatre, your career spans an interesting range of disciplines that go beyond the stage. What else have you been up to? 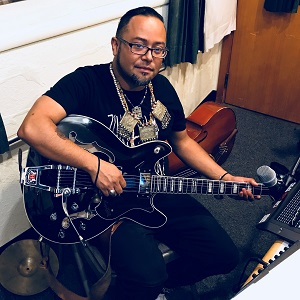 David Molina: While I was on tour last year with Quixote Nuevo, Fade at Trinity Rep, and Mojada at The Repertory of St. Louis, I took advantage of booking solo and collaborative shows in each city with my project, Transient. It is a 20-year outlet for my improvised, experimental, sound-art, ambient, and noise music. Each concert was recorded. In NYC, I performed with composer and trumpet player Darren Johnston, and separately recorded with saxophonist Alex Weiss. About a year ago, I performed with sonic genius and electronic musician Thomas Dimuzio, in San Francisco. I plan on mixing all three concerts, including some solo sets, and releasing them on bandcamp.com during this quarantine.

Other collaborations include Golondrina by San Francisco singer/songwriter Liliana Herrera, and Men of Rab’inal written by Andrew Saito and Lakin Valdez. It’s a tragicomedy that is inspired by the only surviving example of pre-Hispanic indigenous drama, the Guatemalan Rab’inal Achi.

I am the resident Composer for Dance companies NAKA Dance Theater and Tim Rubel's Human Shakes. Both do social justice and political themed work. NAKA often works directly with marginalized community members and produces work about their lives. This includes undocumented immigrants, at risk youth, battered women, the homeless, and trans communities. They also have worked with Mexican activists who are fighting for justice of the disappeared in Mexico.

ML: That all sounds incredible. I’m looking forward to hearing some psychedelic/noise/space/shoegaze/surf/post-rock! Along those lines, tell us about the impact of the coronavirus crisis on you career. What’s happened to your theatre projects? What about your other interdisciplinary work in the music scene?

DM: All my work has been wiped out in every discipline through end of July. This includes my local San Francisco gig as lead sound engineer at Brava Theater Center. I was supposed to perform at The Museum of Contemporary Art, Chicago in the first week of April. The project, by interdisciplinary artist Naomi Rincon Gallardo, is called Formaldehyde Trip: it’s is a Sci-Fi movie about Berta Cáceres, the Honduran human rights and environment activist who was murdered in 2016. It was going to feature a live music score, singers, and cool masks. I was also supposed to work on a project called The Times with Teatro Luna in Los Angeles in May. All my concerts as Transient have been canceled.

ML: You’re a San Francisco-based artist. City officials in the Bay Area were some of the first in the country to start restricting gatherings, close schools, and so on. What has your day to day life been like?

DM: I had planned on building a recording studio and remodeling my apartment before this all went down. Fortunately, this has kept me more than busy during the lock down. Due to constant touring and freelance music production, I am used to spending lots of time alone and working from home, so it's not so bad for me. I do miss my friends, going to the woods, beach, and especially going to concerts. I have been filling out tedious paperwork for emergency artist funds and unemployment (which the state has made very difficult for us freelancers). I try play a little music, get some sun, and work out each day to release the stress.

ML: You mentioned a lack of access to unemployment benefits, something our friends in other industries often don’t realize. Nearly everyone with a career in the arts either works extensively with freelancers, or is one themselves—a problematic situation, as the unemployment system in this country generally doesn’t account for freelance work. The government stimulus package provides some workarounds, but there’s been a lot of frustration.

DM: The stimulus application got messed up for me. I can't even apply online. I’ve been told fax or call in because I’ve worked in different states! Seems like applying to a bunch of artist emergency funds is easier.

ML: I’ve heard so many similar stories. Well, looking forward: in addition to working with major regional theaters and film productions, you’ve done a lot of work with innovative collectives like Campo Santo and Teatro Campesino—groups that always strive to comment on the state of affairs. I suspect the COVID-19 crisis is generating a lot of new social and political insights. Are you or any of your regular collaborators using this episode as an inspiration for new art?

DM: Myself and my artist friends see this uncertain situation as moment to take advantage of. It is the first time we all can focus on our own art, do things for our own selves and well-being. It's moment for self-care and undisturbed creativity, which we lack during the normal, super-busy daily hustle that’s required to survive. I am going to collaborate remotely with several musicians, video and stream my live music sets, and build a new website. The biggest project I have planned is mixing/finishing as many albums as possible from my 25-year career. People always want the soundtracks from the productions I have scored. I never have time due to jumping into the next project. Now I finally have time!

ML: You’re probably aware of the rollercoaster the Alley and its staff have been on as well. This week, we began rehiring staff members thanks to the CARE Act. It’s awesome news although the situation is still dire for the Alley and other theatres. How was your time here in Houston working on Quixote Nuevo? Would you like to share any thoughts about our team?

DM: Working at the Alley was one of the best experiences I’ve had in my theater career. The Alley sound crew collaborate with genuine care. Pierre Dupree (Alley Theatre Sound Supervisor) and Fred Schoppe (Alley Sound Engineer) are truly talented professionals and fun to work with. The sound system was the best I’ve experienced at any theatre. I would jump at any opportunity to work at the Alley again.

I am so happy that staff has been rehired; it’s a ray of hope. I keep reading every day that theatres and music venues across the country have closed and canceled their season or postponed them until further notice. It's very scary. Just like everyone in the industry, l am nervous how the situation will pan out, and affect us in the future. All my theatre and music industry colleagues realize we have to get creative in order to figure out new ways to work. New forms of art always appear during times of struggle and strife. Let’s explore all the possibilities, think outside the box, and beautiful art will grow and that will keep us sane and grounded.

ML: I agree. Thanks, David!