Designer Junghyun Georgia Lee visited Houston in Fall 2019 to design the scenery for the Alley Theatre’s production of Vietgone. Her scenic and costume designs have been produced throughout the United States and internationally. A native of South Korea, Georgia lives in New York City. I recently spoke to her for our Alley@Home: Designer Talks series.

Michael Locher: Georgia, we love the work you did on Vietgone at the Alley. Although you’re a new face to our Houston audience, you’ve been a professional scenic designer working around the country for many years. What are some recent highlights? 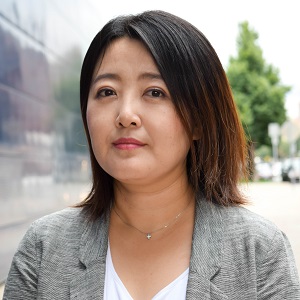 Junghyun Georgia Lee: In 2019-2020 season, I designed set and costumes for a production of 12 Angry Men at Indiana Rep and Syracuse Stage, and August Osage County at the REP of the University of Delaware. I also did the costume designs for Sweat at Huntington Theatre Company. In previous years, I designed for the Guthrie Theatre, Hartford Stage, Cincinnati Playhouse in the Park, and Playmakers Repertory Theatre.

ML: Most people are aware of how COVID-19 has affected the economy, but they might not understand that the performing arts took some of the hardest hits. What has your experience been, or those of your colleagues? How are your projects?

JGL: I was at the Long Wharf Theatre on my first day of technical rehearsal. We were a bit dumbfounded to stop the rehearsal and head back to our housing. The cancellation of the production was announced the next morning, so I returned to New York City. I guess I was aware of the situation more than others—I had family calling from South Korea daily for about a month at that point. I just realized it became real in U.S., finally.

The play that was canceled first at Long Wharf was titled, wait for it—The Chinese Lady—written by Korean American playwright Lloyd Suh. I had designed this play in different venues twice before, so this was going to be my “third-time charm,” the perfect version. The irony was that my set starts as a rusty, scary shipping container from China that opens to reveal a complete jewel-box. The technical support at the Long Wharf was amazing. I had great collaboration going with other designers, the prop shop, paint shop, and lighting department. Leaving the theatre space without a photo was just too painful. Later, the prop shop sent me a photo of the dressed set. I have not opened the e-mail yet.

I am lucky as far my projects go. Two were postponed to the next season of each theater; the rest are still in question. Considering that the majority of the people I work with are now temporarily laid off, I am grateful for the opportunities I had. I am finishing up a design of My Antonia, a new Willa Cather adaptation, with Acting Company in New York City. It is almost done. I have several projects of my own after this.

ML: Like me, you’re the parent of a small child in addition to a working designer, and you’re based in New York City, a real flashpoint for the crisis in America. What has your day-to-day life been like since the closures began?

JGL: I am a single mom in Manhattan. My kid is currently attending public school and her school will not be opening again for the rest of the school year. So, she will be likely finishing her 4th grade at home. It is not homeschooling, if you were wondering. The school administration and teachers went the extra mile to get the right platform to accomplish remote learning. I am amazed by how efficient the classroom is and how well-adjusted the kids are. My parenting is mostly focused on physical and emotional health of our small family.

ML: Though the outlook is uncertain, in the short term, you’ve had some work to wrap up. Could you tell us about your quarantine work? Has the experience of working under these conditions inspired any thoughts about other ways to do theatre?

JGL: I became a lot better at working remotely. I am now completely comfortable with working with assistants and shop heads via e-mail, cloud computing, and rendering software. I still do make scale models, but it will be handy to render my set in 3D very soon. It is also time for me to do catch-up with things that does not involve digital platforms, like reading and drawing. I joked about this to my writer friend that I am going full Jane Austen during this time.

It is a strange time: we’re identifying what designers do in the theatre. Even after intense period of work at my studio, it does not exist if you don’t get to see it on stage with everyone’s work. I tried to console myself to remember the time when you were in design school. Weekly designs with no realization. But you continued because you get to keep the idea and build your own catalogue. I consider my time with some projects that are lost now, the same.

I think this time will definitely change the performing arts. For example, performances will be recorded not just for the archive, but also as added value for the future. Plays will be written about what we are going through right now. Unfortunately, there will also be more filtering of the arts due to sensitivities like we had back in September 11, 2001. I am not sure if the audiences would feel comfortable looking at the China shipping box anymore. But I am keeping my design as it is.

ML: Good. You’re a longtime resident of the United States, but originally from South Korea, and you already alluded to that country’s hard battle against COVID-19. Are your friends and family safe there, and coping? Do you have a sense how the Korean art community is dealing with the pandemic?

JGL: My family in Korea is doing well. They are still highly alert and distancing because the new cases are still found daily. Last Sunday, my parents told me that they went to a drive-in church where all the participants parked around a large track, and the minister delivered his sermon from a stage in the center. What an idea! I think American churchgoers should give it a try.

Theatre performances have been stopped for the last two months, and probably more. So, all my friends are staying home there. Some studios are having online seminars on technical theater and design forums. I have not checked it out yet but will be catching up this week.

Many of my friends in Korea are voicing concerns about privacy vs. government authority. The main reason Korea was able to catch up with the spread of this is tracking of individuals via mobile data usage right after fast result on testing. Now, it is at a point they can identify so called “super spreaders” and make their personal information open to public. I am wondering if this really is an ideal way. I can’t shake the feeling that this will mark in a history where we change our mind about public good and individual freedom.

ML: That’s really interesting, and yes, a sign of our troubled times. Speaking of outlook: let’s talk about something more positive for a moment. Friends of mine who aren’t theatre professionals are sometimes surprised to discover that decades into the career, there are still dream projects in our heads – plays we’d love to design but haven’t had the opportunity to tackle; collaborations we’d jump at the chance to engage. What would you love to do once the theatre industry is back on its feet?

JGL: I am a productive person, but it does not mean that I am productive and creative every day of the week—even in quarantine. So, part of my day is for design work, but a large part of my day is to create something other than theatre. I feel totally guilty saying this, but there: I said it.

I am spending more time on other art forms than theatre. Sorry to say, I haven’t been following the performance videos and clips [released by many theatre companies during the closures]. I figured I will meet the surge of talent once the quarantine is over. In the meantime, I am stepping back and revisiting my artistic background: I was trained in drawing, painting, and sculpture before I got my degree in design. I am painting at the moment. It is the best thing that’s happened to me since I returned home from productions. Once the productions start again, I will be with friends working together. And I do look forward to that.

ML: Vietgone, which ran last Fall, was your Alley Theatre debut and a fast audience favorite. We loved your clean, carefully observed scenic design. Continuing the discussion of happier times: how would you describe your experience here in Houston? What was it like working with the Alley’s scenic and prop departments? And do you have any thoughts or messages you’d like to share with them, especially in light of the closures and layoffs they’ve had to endure alongside designers like you?

JGL: When I was looking at photos of Vietgone I took in the theatre last October, I was amazed yet again by the work that was done at the Alley. My design was so simple that it had its possible downside of looking boring. Sometimes a designer can respect the text so much and create a design so simple that the actors and other designers are forced to do the heavylifting. [Director Desdemona Chiang’s]approach to the play was amazing; [Lighting Designer Lap Chi Chu] lighting was perfect; [Projection Designer Victoria Sagady, Costume Designer Valerie Bart, and Sound Designer Elisheba Ittoop’s] work all melt together and landed right where we wanted to be. Vietgone was one of the most successful experiences I’ve had in that sense. The technical department made everything possible in the space; the scenic paint charge was masterful. (I mean, look at the photos! It was one roadkill away from being a real highway.) The supportive and thoughtful props department helped everything work so well. I am forever grateful for the gift I was given.

I miss all of my Alley family. My heart sunk when I heard my friends at Alley were temporarily unemployed last month. We are in the unique situation where majority of my friends, including myself, are out of work indefinitely. It is a daunting experience. But I have a faith in what we do. As a group of artists, we will be together in the same room again to create something that is so meaningful to all of us. So, until that day, be strong.