A home of our own

For 70 years, the spirit of the Alley Theatre has enriched the cultural life of Houstonians. And, for 49 years, that spirit has made its home in the white, multi-turreted building at 615 Texas. Dedicated on October 13, 1968, this distinctive building fulfilled the dream of a permanent home for the then nearly 22-year-old theatre company, and the design proved an immediate magnet for comments from friends and critics alike.

Some locals deplored its turrets as “anti-aircraft emplacements,” but Fortune magazine praised the building’s flexibility. While some quietly worried over the limitations on staging imposed by the architecture, supporters found it “distinctive” and pointed to the ingenious planning that placed the plumbing, elevators, and heating and air conditioning equipment in the four corner towers.

To celebrate the new theater building, both Houston newspapers (yes, there were two then) produced special sections on the day of the first performance in the new theater. Mayor Louie Welch proclaimed it “Alley Theatre Week,” and veterans of Houston’s theatre scene remarked that the spectacular opening night was a far cry from the Alley’s first performance on November 28, 1947, in a local dance studio. 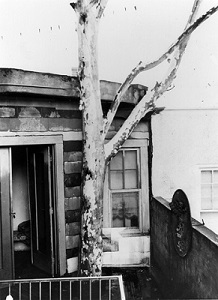 The Alley’s first home was a single, large room at 3617 Main Street, almost hidden at the end of a long alleyway and pinched between two retail stores. Rita Cobler, a founding board member, took one look at the alleyway and suggested the name “Alley” for the theatre. And so it has remained for 60 years. Serving as a dance studio by day, at night the room became a theatre for Houston’s newest performing arts company. Offering cramped seating for only 87 people, the room featured an arena stage, a theatre in the round, and a sycamore tree that reached out through the roof. Preston Bolton, a board member then and now, helped design the sets for the productions.

There was no heat in the winter, no fans in the summer, and the nearest drinking water was three flights up. Picturesque as the sycamore tree was, there were gaps around it where it pierced the roof. When it rained, water spilled into the theatre and onto those seated nearby. But the humble surroundings didn’t stop audience members from crowding in to sit on the hard wooden chairs, on top of the piano, or on the still-cold cast iron radiators. Less than two years after its first performance of The Sound of Hunting, the lease was cancelled and the Alley was homeless. 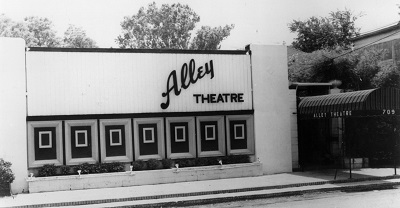 But Alley Founder Nina Vance had no concerns. “I was going right on,” she is remembered as declaring. The staff immediately set out to find a playing space; and soon found an abandoned fan factory on Berry Avenue, just off Louisiana. Nina labeled it “a very adequate space,” and cast, crew, and volunteers set about turning it into their new home. It was from this boxy, unprepossessing building that the Alley was to enjoy early success. Attracting and rewarding the city’s best young actors, artists and intellectuals, the quality of the work anticipated a real renaissance, still to come.

But first the grimy factory had to be transformed into a suitable performance venue. With an urgency born of desperation, volunteers worked the telephones to solicit donations. Money, workers and supplies poured in. The rallying cry became “Come. Bring a brick and a buck!”

In remarkably short order, what had been a grimy old factory was transformed into a central performance room. Risers were built on all four sides, and seating capacity was nearly tripled, with 230 seats set in neat rows. To maintain the sense of the company’s name, a small alleyway was created at the side of the property as the access between the lobby area and the arena.

Finally, its reincarnation complete, on February 8, 1949 the theatre was ready for the opening night performance of Lillian Hellman’s The Children’s Hour. The new theatre looked inviting, with its simple but pleasant façade and a set of old elevator doors, pressed into service as gates, opening onto the alleyway. Those gates now reside on the third floor of the current Alley Theatre building near the elevators. The renovated fan factory stage would later provide the model for the Alley’s Neuhaus Stage.

Original Alleyway Gates from the Fan Factory on Berry Avenue 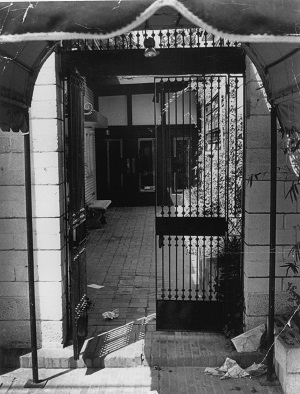 In 1949 the Alley Theatre moved from its original home in a Dance Studio at 3617 Main Street to an abandoned fan factory on Berry Avenue. To maintain the sense of the company’s name a small alleyway was created at the side of the property as the access between the lobby area and the stage with these gates, originally a set of old elevator doors, opening onto the alleyway. The renovated fan factory stage would later provide the model for the Alley’s Neuhaus Theatre. When the Alley moved into it's new downtown home in 1968 the original alleyway gates were installed in the Hubbard Theatre lobby. 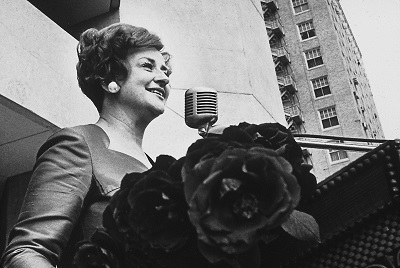 For thirteen years the Alley prospered at Berry Avenue. By 1962 Nina Vance and her staff had conceived a larger dream – a new home for the Alley, in the downtown heart of Houston, a building designed and built as a theatre with two stages. The design represented an approach to staging, in fashion for a time, which emphasized costumes rather than scenery, as the primary element. Later, this stage design would vex directors with its limitations and inflexibility.

In May of 1962, the Houston Endowment, a charitable trust established by the late Jesse H. Jones and Mrs. Jones, made the initial gift to the Alley of approximately one half block of land in the center of the new civic center downtown for a new building. Then, in October of that same year, the Ford Foundation announced a gift of $6.1 million to nine non-profit theaters, including a grant of $2.1 million to the Alley to construct the new building and to help it in its developmental phase for the first 10 years. But, to qualify for the grant, the Alley was required to raise an additional $900,000 locally.

During the hot summer of 1963, a city-wide campaign yielded 25,000 individual gifts, securing the grant and assuring there would be a new theatre for the Alley. “The Chronicle’s” seven column headline read: “Alley Drive Smashed Over Top,” and the news was flashed on the Times Square marquee in New York City. Some of the people leading the campaign were George A. Peterkin, and T. N. Law, Isaac Arnold, J. W. Link, Jr. and John H. Lindsey.

By the following Spring, the Alley had acquired 21,000 square feet of adjacent land, making about five/sixths of the block available for the new building. As the project’s pace accelerated, Ulrich Franzen was signed as the prime architect and plans were drawn for the building; the Alley received both a playwright in residence award from the Ford Foundation (for Paul Zindel) and another grant of $1.4 million from Ford Foundation to support innovative theater architecture.

Construction on the new theatre began on August 10, 1966 with the dedication celebrated 26 months later on October 13, 1968. By opening night, November 26, 1968, more than 20,000 subscriptions had been sold, and it seemed the entire city was on hand to watch. Mayor Louie Welch and 37 astronauts attended the inaugural production of Bertolt Brecht’s Galileo. British actors Maggie Smith and Robert Stephens from the National Theatre were there as well to see the building as an inspiration for their own. The American actor David Wayne also attended, as did the Ford Foundation’s McNeil Lowery, a great friend and benefactor to the Alley.

For the next thirty-three years, the Alley thrived, challenging its audiences and redefining the Houston theater experience. As an example, the 2001 season demonstrated the unique advantage of having two stages in the same building when the Alley staged House and Garden by Alan Ayckbourn. These two linked plays were performed simultaneously in the Alley’s two theatres, by the same cast. A character would exit the set of House on the Hubbard Stage, negotiate the backstage maze of corridors and staircases and enter, with only seconds to spare, on the set of Garden in the Neuhaus Arena. 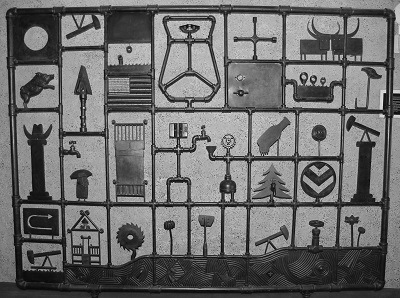 Jim Love designed sets for the Alley Theatre’s production of Christopher Fry’s The Lady’s Not for Burning in April of 1955.  He followed that up with The Remarkable Mr. Pennypacker and The Rainmaker. It was his design for The Glass Menagerie that would change his life. His design included a large steel frame surrounding the set. Not knowing how to weld, he brought someone in to help.  Jim was fascinated with the work, and couldn’t wait to learn more. He later gained national recognition in 1961 when his work was included in the Museum of Modern Art’s groundbreaking exhibition The Art of Assemblage. He would come back to the Alley once more to design the set for Waiting for Godot.  The simple iron tree that he created as his main scenic focal point is considered a valuable piece of art today and belongs to the Museum of Fine Arts, Houston.  He was a central figure in the Houston art circle from the 1950s until his death in 2005. In addition to Area Code, donated to the Alley by the Brown Foundation in 1968, Jim Love’s art can be seen all over the city of Houston, including Call Ernie (1985) at Hobby Airport, Portable Trojan Bear (1974) at Hermann Park and Paul Bunion’s Flowers at Rice University.

A MORNING TO REMEMBER

But the Alley persevered. The Carpetbagger’s Children, a world premiere by Horton Foote commissioned by the Alley, was scheduled for the Neuhaus. It went on to continue its run at an alternative venue and later to Lincoln Center in New York and was nominated for a Pulitzer Prize. After seven months of reconstruction, the Neuhaus Stage reopened Friday, January 18, 2002 for performances of John Steinbeck’s Of Mice and Men.

The total destruction of the rehearsal and production spaces in the lower levels of 615 Texas necessitated the construction of new facilities. In November 2002, the Alley unveiled its new “Center for Theatre Production.” This project was accelerated in reaction to the devastation wrought by Allison. A five-story, 75,000-square-foot “theatre-making laboratory in the sky,” the Center is located fourteen stories above downtown Houston. One of the largest production facilities of any theatre in the United States, the Center includes spacious rooms with 56-foot ceilings for creating sets, costumes and props, three new rehearsal studios, the Alley’s artistic, production and administrative offices, as well as a boardroom, staff cantina, script library and archive.

At its opening, Gregory Boyd (Retired Artistic Director) announced that "this new Center will attract the most talented actors, artists and theatre professionals to Houston.”

Today, the Alley is the only major Houston performing arts company that owns its building. The building houses the Patricia Peckinpaugh Hubbard stage, which features a unique thrust stage, and seats 824, and the Hugo V. Neuhaus Stage, seating 310 (see below “What’s in a Name?”) and which can be configured as either a thrust stage or as an arena - a tribute to Nina Vance whose early productions were always performed with the audience on four sides.

Over the course of its first 60 years, the Alley Theatre has grown, struggled, persevered and triumphed. At times stretching its capabilities, it has always exceeded expectations. From its humble beginning in a dance studio to its current position of national and international prominence, the Alley Theatre has made its downtown home a cultural nexus in Houston’s performing arts, social and business communities.

WHAT'S IN A NAME?

The Alley’s two stages were originally called, simply, the “Large Stage” and the “Arena Stage.” In 1987, the Arena Stage was renamed the Neuhaus Stage in honor of Hugo V. Neuhaus, Jr. (1915-1987), architect, president of the board of trustees of the Alley Theatre, chairman of the Texas Commission on the Arts, and chairman of the building committee that selected Ulrich Franzen to design its permanent home in 1964. In June of 2003, the Alley officially began referring to its 824-seat stage as the Patricia Peckinpaugh Hubbard Stage, named in honor of the long-time Alley supporter, Life Trustee, and board president and board member upon a $5 million gift from the Brown Foundation.